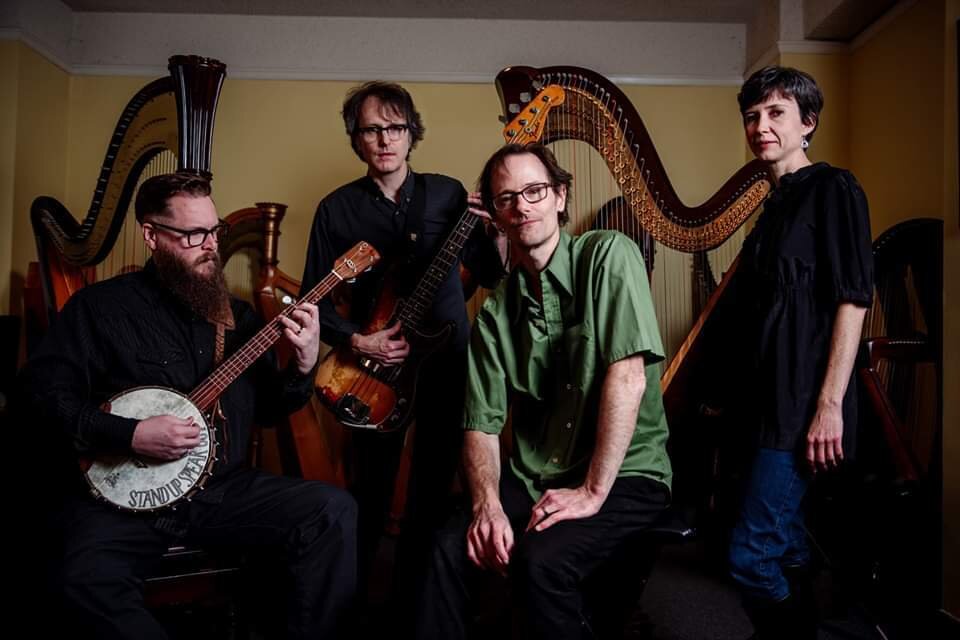 Singer songwriter Matt Wilson and his harp and banjo orchestra perform the best music from Matt’s deep repertoire, reaching back to his earliest compositions, and forward as well to the songs he’s chosen from his recent streak of songwriting luck. The group is also capable of spinning up unique and authoritative renditions of old time songs that Matt considers to be among the greatest of all music history. Each piece in their repertoire is presented on a feather bed of banjo rhythms, arpeggiating harp and reverberant swells of guitar.

Raised in St. Louis Park, Minnesota, Matt became a fan of rockers like Elvis Costello, Bruce Springsteen and Devo. He and his high school friends formed a group called The Panic, and spent much of their youth as under-aged performers in Minneapolis nightclubs, warming up for future luminaries such as Husker Du and The Replacements. In the early 80s, Matt followed his brother Dan to college in Boston where they formed a number of bands, including the Love Monsters, marking Matt’s first turn as a lead singer. Returning to Minneapolis, the brothers joined forces with bass player John Munson to form Trip Shakespeare, writing, recording and touring together for a decade. John and Matt currently perform in a rock band, The Twilight Hours.

Matt’s music has been featured on MTV, Rolling Stone, The New Yorker, Spin, The Toronto Star and many other publications. Trip Shakespeare’s single, “Toolmaster of Brainerd”, was named by City Pages one of Minnesota’s 50 Greatest Hits, and that group was included by nationally-influential radio station The Current in its 2017 list of 893 Most Essential Musical Artists of All Time. Songs from throughout Matt’s career have been featured on The Current, including the epic “Descender!” from his solo album Burnt, White & Blue, and the joyful “Queen of Tomorrow” from The Twilight Hours’ debut LP Stereo Night.

The new group which Matt calls an “orchestra” has a grassy sound that’s easy to fall into. Most striking to both the eye and ear is the harp mastery of Phala Tracy. An inventive collaborator, she is a key element each year at The New Standards Holiday Show. The band’s sound is underpinned by the sparkling banjo groove of Quillan Roe who is best known for his work with the Roe Family Singers, winners of a prestigious McKnight Fellowship. These sunshine tones of harp and banjo are rolled out on a wide road of electric bass provided by electric guitar ace Jacques Wait and ornamented by Matt’s acoustic guitar, piano and melodic harmonica stylings.

Lo Duca is newly formed collaborative of singer songwriters Crist Dahl, Jessica Sund and Charlie Bee. They have most recently performed at the Castle’s 2019 Bob Dylan Tribute Show, and have played together in various local groups for over 10 years.